To All Members and Nonmembers,

I would like to thank all members and nonmembers who, at this time, are considering donating to The Nanaimo Fish and Game due to the COVID 19 closure.  For those of you who are wondering how to donate funds, here are two methods.
Pay Pal is the easiest and quickest, and you just have to click on the DONATE section of the webpage, however the Club does pay a fee for this service.
If you are unfamiliar with this system, simply mail a cheque to this address:

Please do NOT drop off a cheque or cash with Wayne (our Caretaker) at the club.

Larry and Kathy McFarlane have donated $200 and would like to challenge all Life Members to meet or exceed their donation.

We are in this for the long haul so thank you to all whom are considering donating to our wonderful facility.

A link to important information regarding hunting and angling services during COVID-19 has been posting to the website.

As part of the ongoing response to the COVID-19 pandemic, THIS PAGE will provide updates regarding any changes implemented by the Province related to hunting and fishing activities.

As the Covid-19 situation rapidly evolves, the Resource Stewardship Division within the Ministry of Forests, Lands, Natural Resource Operations and Rural Development continues to modify our response accordingly.

This difficult decision was deemed necessary in order for the Club to do its part in keeping our members and public healthy and safe during the COVID-19 crisis. The Club will adhere to the recommendations of the BC Center for Disease Control and BC Chief Public Health Officer and the situation will continue to be monitored closely, so as to determine when Club facilities can reopen and resume normal operations.

Unfortunately, as it has with many other families and institutions, this has begun to take a financial toll. Understandably, renewals and new memberships have taken a sharp decrease. Our memberships go a long way towards the approximately $150k in fixed annual expenses (heating, hydro, insurance, etc.) the Club has whether it is open or not.

We are reaching out to you now in the hope that, if you have the means to do so, you will renew, purchase a new membership or even make a small donation to the Club. In recognition of your generosity and loyalty in these trying times, the Club will be extending the length of memberships to compensate for the time our members have lost due to the closure. This time will be added to your membership once the Club facilities have reopened.

Scroll down to see how to donate.

Thank you for taking the time to read this. Stay safe and healthy

British Columbians are being targeted by fraudsters who want to profit from consumers’ fears and desire to protect themselves from the COVID-19 (Coronavirus).
The Canadian Anti-Fraud Centre (CAFC) is reporting that scammers are setting up websites to sell bogus products, and using fake emails, texts, and social media posts as a ruse to take your money and get your personal information.
The emails and posts may be promoting awareness and prevention tips, and fake information about cases in your neighborhood. They also may be asking you to donate to victims, offering advice on unproven treatments, offering protective gear or detection kits, or fake home sanitizing services.
There are currently no vaccines or drugs approved to treat or prevent COVID-19. The current forecast to have efficient vaccines available for general public is months away and will be communicated via legitimate government and health authorities.

The Archery Division has just announced the cancellation of all indoor Archery sessions  until further notice due to COVID-19.

We had to close the club on Wednesday and Thursday due to the heavy accumulation of snow. We opened it on Friday but I guess we were a bit optimistic when the forecast said the storm was over. Saturday dawned and the facilities were buried in snow so we had to close it again.

A special thanks to Larry McFarlane who spent three days on the club tractor clearing the parking lot and caretaker Wayne who spent those days shoveling and clearing all the walkways. It seemed they just got finished on the first day and had to start from scratch again the next day as the snow just kept coming. Saturday was a full day of plowing and shoveling again.

We are going to open it tomorrow and hope it is really the end of the storm this time but all the ranges will be very hard to use as they have a heavy accumulation and no one has had time to work on them. 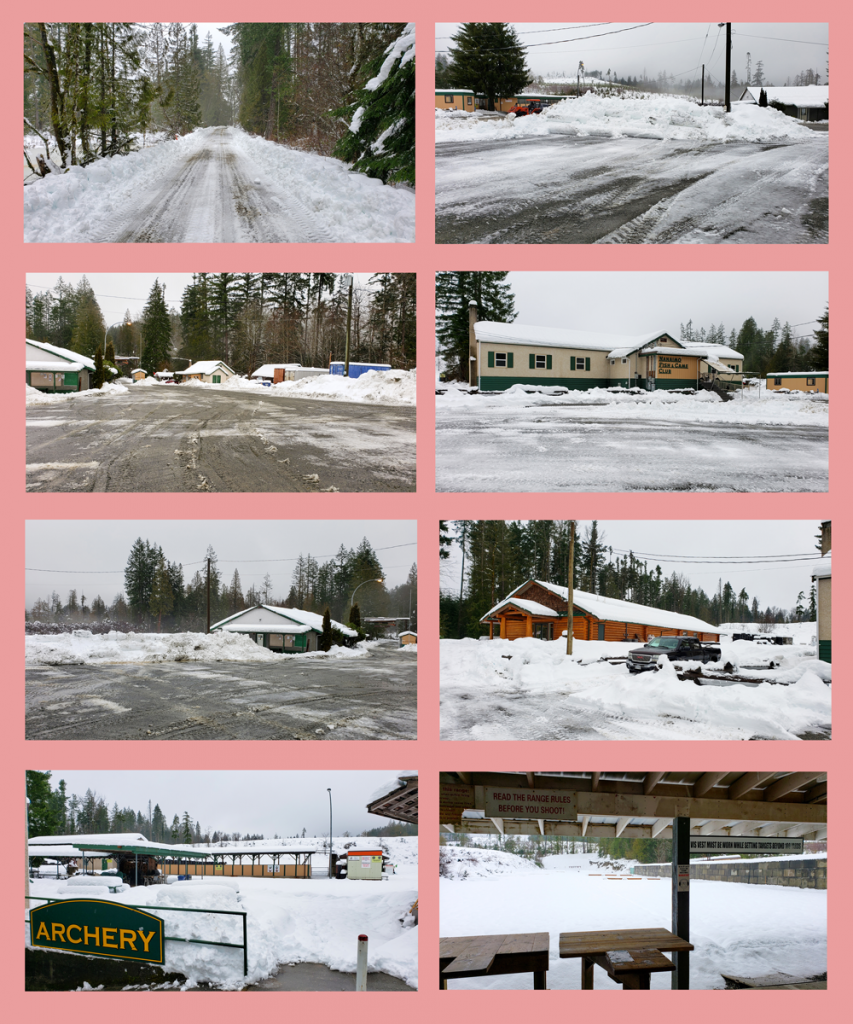 NANAIMO — The snowfall blanketing the region since Sunday night will go into the record books.
Nanaimo Airport set new benchmarks on both Tuesday, Jan. 14 and Wednesday, Jan. 15 for snowfall within a 24 hour period on those dates. The airport recorded 21.2 centimetres on Tuesday, beating the old record of 19.1 centimetres set in 1951. END_OF_DOCUMENT_TOKEN_TO_BE_REPLACED

By Chris Schneck on December 21, 2018 in News, Uncategorized

Hello Club Members. We have had to close all the club facilities twice now because of storms causing trees to come down across the road into the club and on other places on the property. The road is now clear and you can get into the property. Individual ranges may close temporarily – such as the rifle range which currently has two trees that have fallen down from the berm in front of the 200 yard target line. These will be cleared as soon as possible. More storms are supposed to roll in so we may have to close again. With power outages everywhere we may not be able to post these closures right away so be patient and prepared for unexpected closures.

In the spring, the Nanaimo Fish and Game was contacted by Jean Chandler with regards to refurbishing the fishing float at Westwood Lake. The lake was a favourite spot of Mrs. Chandler’s son, who had passed away a few years earlier, and her thought was to provide partial funding to restore the float to its former glory in his memory.  The Fish and Game had originally built the float over two decades ago for donation to the City and the enjoyment of the residents of Nanaimo and, as such, was more than happy to take on the project.  Initial measurements were taken with the help of Steve Corscadden and, after some discussion, it was decided to replace the decking, benches and ramp with yellow cedar and pressure treated plywood with Duradek (donated by Greg Stevens) covering.  On October 27th and 28th, John Noble, Ron and Mark Tuson, Doug Miller and myself put in roughly fifty hours of work and completed the project Sunday afternoon (wow 20’ 2”x8” boards are a lot heavier than they look!).  Mrs. Chandler and her son Joel also pitched in and helped with site clean up, which was very much appreciated.  Fortunately, the weather cooperated for the better part of both days and the crew got away with only a moderate soaking.  With the restoration of the float complete, all those who enjoy Westwood Lake will have an excellent spot to take in the views and do a little fishing for decades to come.

Article and photos by Chris McFarlane 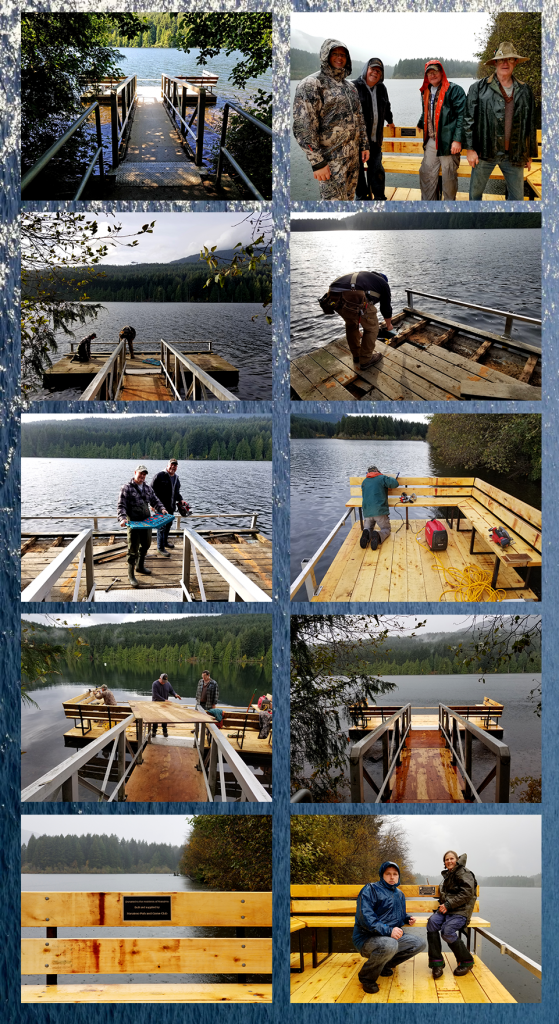 I would like to express my gratitude to your club and in particular to your volunteers: Chris McFarlane, John Noble, Ron Tuson, Mark Tuson, Doug Miller and others who participated in planning the fishing wharf replacement at Westwood Lake.
My son, Luke Chandler passed away February 27, 2017 when his canoe flipped in the icy waters. He succumbed to the cold and was unable to right the canoe, jump back in, and return to shore. Although people on shore called for help, he drowned before there was help available to him. This accident was in the waters visible from the fishing wharf. This wharf is the place that I, my family, and many of Luke’s friends go to remember Luke.
I contacted Chris who asked the executive if the club would be willing to split the cost of refurbishing the wharf with me. I proposed that I would replace the NFGPA plaque with one to match a memorial plaque for Luke. With Chris and the executive’s support, the club agreed to this plan. Chris worked with the city of Nanaimo and with other volunteers to determine the condition of the existing wharf parts and to develop a list of material requirements for the refurbishment.
On the weekend of October 27 and 28, your club volunteers spent their weekend time taking off the old, replacing the new, and installing the plaques. By the way, please note that this was the weekend of rain that the news media shared so many pictures of floods across BC and the lower mainland. When I asked if an umbrella would help, the hardy NFGPA guys replied that it is only water. (What is water amid slime and sawdust anyway?)
I’ve shared the plaque location and pictures with many of Luke’s friends and with family. Feedback has been tremendous. People noticed how new it looks without my telling them about the funding and work from your club. There is a Facebook site for memories of Luke that people continue to share thoughts and memories of Luke. I’ll be putting a link on it to your website so that Luke’s friends and family can see Chris McFarlane’s write up on the NFGPA home page about the work on the dock.